Information about our beautiful place

3HILLS BOUTIQUE is the alternative proposal in tourism and has been designed in order to cover every need and preference during your stay. Combine escape suggestions both to the mountain and to the sea. It is located just 12 klm from the nearest city of Katerini. Our location is blessed with both beautiful long sandy beaches and famous, imposing mountains. Pieria’s has several beautiful beaches which can be reached within a distance starting from 18klm up to 33 klm.

Don’t miss the chance to visit one of the most famous Mountains in the world ‘’Olympus’’. Find yourself wandering on its enchanting routes, its exceptional biodiversity and rich flora.  Our other mountains ‘’Pierian’’ are known for their rich flora. Mainly for their deciduous forests as well as for some rare species of wild flowers. The mountains are lush with rich and diverse vegetation made of dense forests of beech, oak and chestnut, black and red pines.

Greece has a typical Mediterranean climate, which lends itself to mild and often wet winters and dry summers. The country is mostly sunny throughout the year. The northern part of the country can be very cold during the winters, even receiving snow in some areas.

The climate in Trilofos is mild, and generally warm and temperate. There is significant rainfall throughout the year. Even the driest month still has a lot of rainfall. The average annual temperature in Katerini is 16.3 °C | 61.4 °F. Trilofos lies in the northern hemisphere. Summer starts here at the end of June and ends in September.

On the white sand of Olympic Beach, that is only 18km away from Trilofos, beautiful kiosks with wooden floors await you to make your holiday even better. It is necessary to book one day in advance. Furthermore you can visit the beach of Plaka Litohorou, Platamona and Alykes. 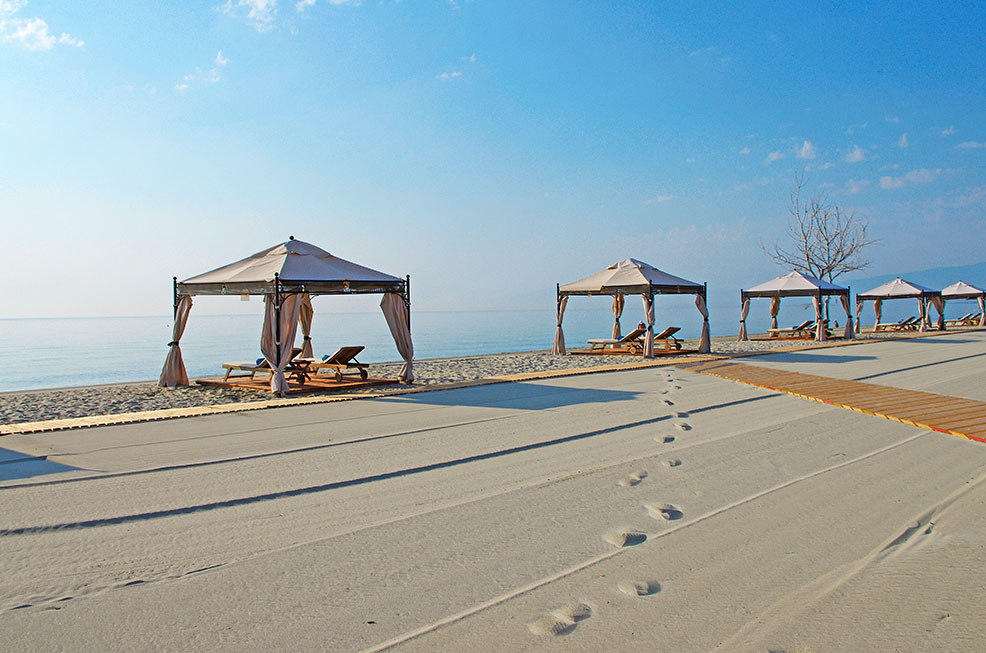 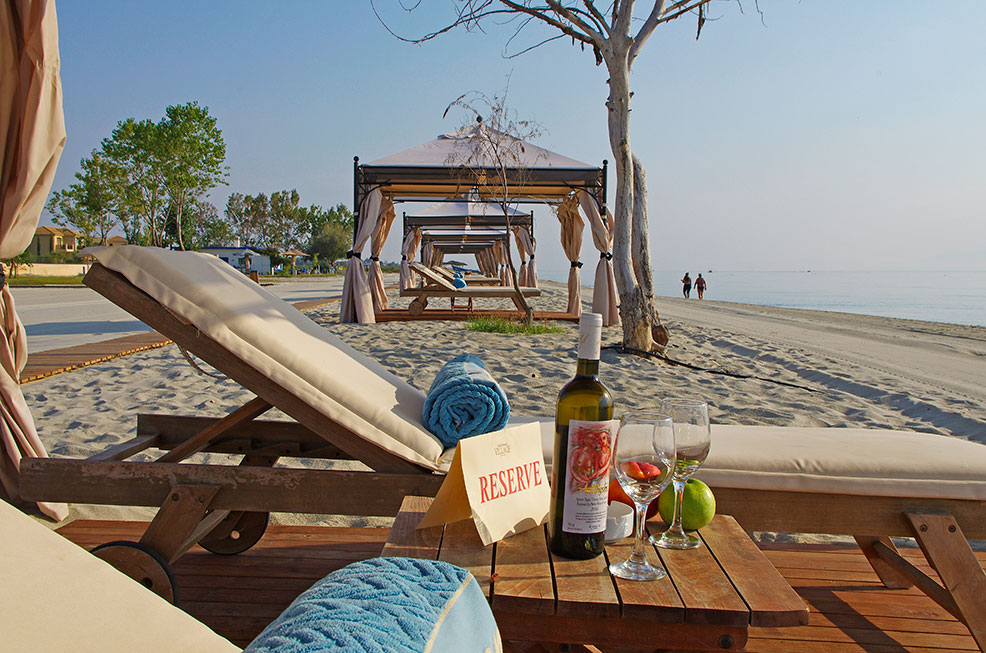 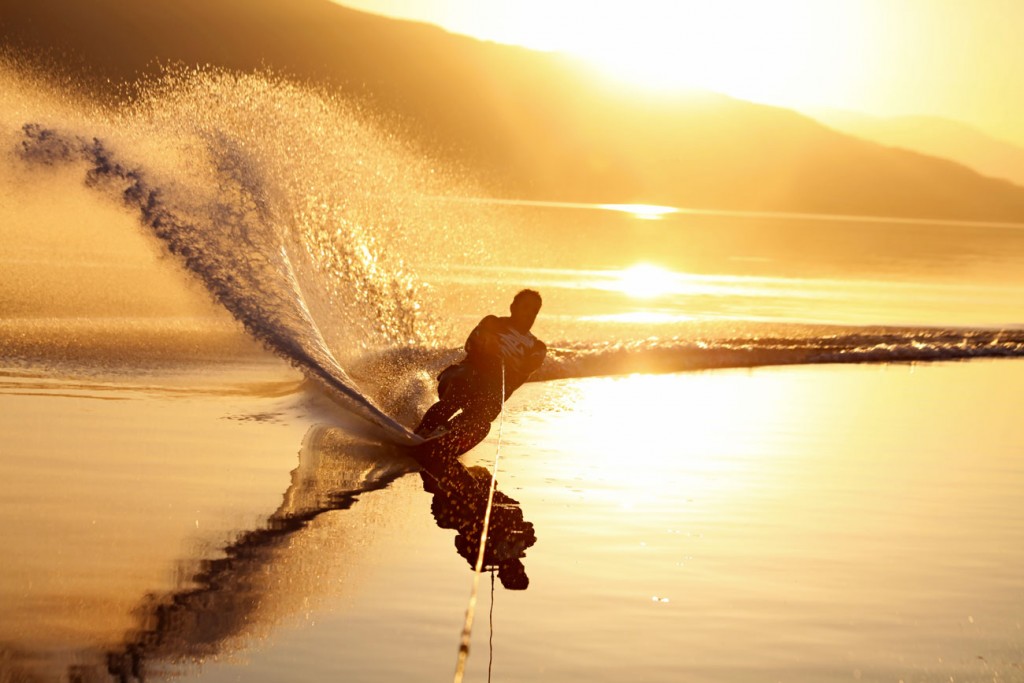 The archeological site of Dion is located on the northeastern slopes of Mount Olympus and at a distance of 30 kilometers south of Katerini. The Archaeological Museum was inaugurated in 1983 and houses finds that come mainly from Dion. To the south and on the borders of the settlement of Dion, having to the west the Sanctuary of Demeter, is the Ancient Theater.

Platamonas is identified with its famous castle. Platamonas Castle is of the Frankish occupation times, built during the Middle Byzantine period. It is located southeast of Olympus, in a short distance from the current town of Platamonas and only 40 km from Katerini.

Olympus is the highest mountain in Greece and is 50 minutes trip from Trilofos. It is mainly known worldwide for its mythological context, since at the top of it (Mytikas-2,918 m.) lived the Twelve “Olympian” Gods. Organized mountain shelters with various mountaineering and climbing routes, are at the disposal of visitors, who want to explore its beauties.

Vergina is best known as the site of ancient Aigai, the first capital of Macedon. In 336 BC Philip II was assassinated in Aigai’s theatre and his son, Alexander the Great, was proclaimed king. Vergina’s museum is only 40 minutes driving from Trilofos.

Close Menu
We use cookies on our website to give you the most relevant experience by remembering your preferences and repeat visits. By clicking “Accept All”, you consent to the use of ALL the cookies. However, you may visit "Cookie Settings" to provide a controlled consent.
Cookie SettingsAccept All
Manage consent

This website uses cookies to improve your experience while you navigate through the website. Out of these, the cookies that are categorized as necessary are stored on your browser as they are essential for the working of basic functionalities of the website. We also use third-party cookies that help us analyze and understand how you use this website. These cookies will be stored in your browser only with your consent. You also have the option to opt-out of these cookies. But opting out of some of these cookies may affect your browsing experience.
Necessary Always Enabled
Necessary cookies are absolutely essential for the website to function properly. These cookies ensure basic functionalities and security features of the website, anonymously.
Functional
Functional cookies help to perform certain functionalities like sharing the content of the website on social media platforms, collect feedbacks, and other third-party features.
Performance
Performance cookies are used to understand and analyze the key performance indexes of the website which helps in delivering a better user experience for the visitors.
Analytics
Analytical cookies are used to understand how visitors interact with the website. These cookies help provide information on metrics the number of visitors, bounce rate, traffic source, etc.
Advertisement
Advertisement cookies are used to provide visitors with relevant ads and marketing campaigns. These cookies track visitors across websites and collect information to provide customized ads.
Others
Other uncategorized cookies are those that are being analyzed and have not been classified into a category as yet.
SAVE & ACCEPT
Powered by